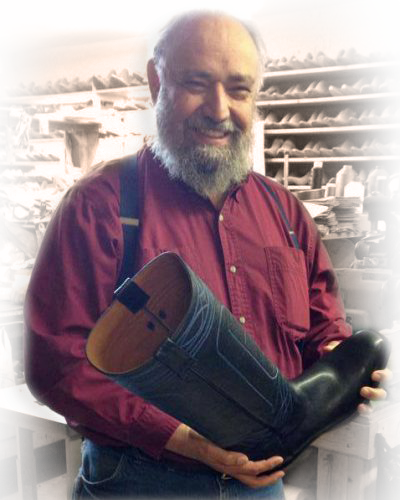 Phoenix bootmaker David Espinoza has been a central figure in the shoe and leather trade since 1968. In 1990, he opened The Bootmaker but David’s half-century career began as a hobby at his boyhood home near 30th Street and McDowell right here in Phoenix.

While still a student at East Phoenix High School, David found a mentor in master bootmaker Jesse Bogle. Bogle owned a boot shop located between David Espinoza’s home and school that he passed by every day. After badgering Bogle to teach him the trade, Bogle finally agreed and took David under his wing.

Jesse Bogle’s shop was located by the old Tovrea Stockyards, a major hub for ranching activity in Phoenix. Every day, David saw the ranchers and cowboys wearing their leather cowboy boots and it left a lasting impression on him.

David’s first leather creation happened by chance while he was in high school. His sister had a piece of scrap leather leftover from a school project that he used to create a leather watchband. Family and friends admired the work so much that it inspired him to start making leather sandals on the patio of his family home. It wasn’t long before he outgrew the porch and moved his sandal making operation to a studio located nearby on 24th Street in Phoenix.

David Espinoza started working under RJ Foley, an accomplished master bookmaker in the Phoenix area, in 1972. Foley taught him the entire boot making process during the year he worked with him and the experience gained was invaluable.

David started a career in HVAC design after studying industrial design and engineering from Arizona State University. However, he continued to create leather cowboy boots in his spare time. He built a strong customer base from arts and craft shows he participated in Tempe and Tucson on the weekends.

David’s fate was sealed in the late 1970s when he got laid off from his job in the HVAC industry and his career as an Arizona bootmaker began in earnest. With a check from his employer for severance pay in hand, David paid a visit to a colleague of RJ Foley, H. Bonham. After agreeing to buy a shoe sander from him, Bonham handed David the keys to his shop and everything in it.

With the machinery he inherited from Bonham, David Espinoza opened a shoe store and repair business near 7th Street and Indian School called The Shoe Shop. The business was successful enough that he soon expanded to four locations in Phoenix. David ultimately sold the business following changes in consumer trends and competition from overseas manufacturers.

After selling each of his four stores, David kept some of the shoe machinery the new owners didn’t want to retain. He soon set up a boot manufacturing operation inside a storage locker by running an extension cord to the machinery. From this humble beginning, he launched The Bootmaker in 1990.

A few months after he started creating boots in a storage locker, Phoenix bootmaker David Espinoza moved his operation to one of his previous repair shops located on Central and Camelback. Always one to admire the work of accomplished legends in the industry, David enrolled in a cowboy boot making course taught by Randy Merrell shortly after moving to this location. Merrell is well-known for his cowboy boots, hiking boots, athletic shoes, and many other types of quality footwear.

David Espinoza, along with a staff of highly experienced craftsmen, has been designing, manufacturing, and selling boots from his current location since the early 1990s. Eduardo, who puts the soles on the boots, has worked with the Phoenix bootmaker since he opened the store. His other two employees have been with him for about 15 years. All three are highly skilled and come from families that have been in the shoemaking business for many generations.